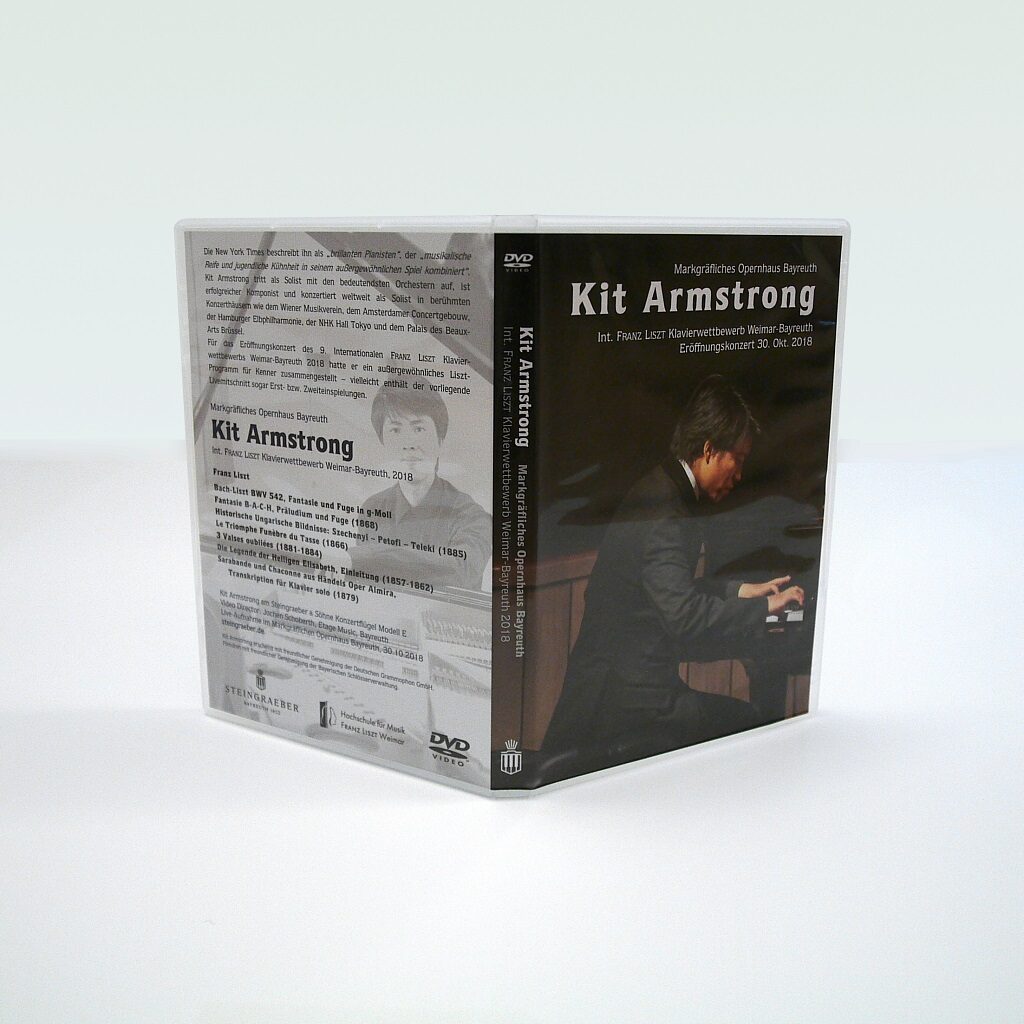 Kit Armstrong in the Margravial Opera House in Bayreuth

Just in time for the beginning of the 10th International FRANZ LISZT Piano Competition Weimar-Bayreuth, the piano manufacturer Steingraeber, Bayreuth, publishes the DVD “Kit Armstrong in the Margravial Opera House in Bayreuth”. The recording comes from the opening concert of the 9th edition of the piano competition in 2018.

Kit Armstrong’s appearance at the opening concert of the Liszt Competition 2018 was tailor-made: even specialists did not know all of the works that the young star had selected for his Liszt recital: in the grandiose ambience of the Margravial Opera House in Bayreuth, the analyst celebrated a little-known Liszt among the young star pianists. The result was a live recording with a high repertoire value and a sound design that explores dynamic extremes and celebrates pianissimi with an almost incomparable touch culture.

As with the existing recording at the same location on July 24, 2019, a concert grand piano model E from the Bayreuth piano manufacturer Steingraeber is Armstrong’s sonorous partner.

The DVD is available from Steingraeber and the usual online sales outlets.

“It doesn’t really go well with the reputation of a release ‘courtesy of Deutsche Grammophon GmbH’ when we read right on the back of the DVD case of Kit Armstrong’s live recording from the Markgräfliches Opernhaus Bayreuth: ‘For the opening concert of the 9th International Franz Liszt Piano Competition Weimar-Bayreuth 2018, he had put together an extraordinary programme for connoisseurs – perhaps the present live recording even contains first or second recordings.’ Perhaps? What kind of information is this that a good editor could have researched, clarified and passed on in advance? Well then, there are indeed some gems among the works recorded.

Among them are works from the late period, such as ‘Three Historical Hungarian Portraits’ from 1885 and three ‘Valses Oubliées’ from 1881-84, which were composed somewhat earlier. In addition to these works, which are so remarkable for Liszt’s late style, Armstrong also plays transcriptions from Handel’s opera ‘Almira’ and two of Liszt’s fantasies after Bach: the Fantasy, Prelude and Fugue in G minor BWV 542 and the Fantasy B-A-C-H, Prelude and Fugue from 1868. But the transcriptions of the Introduction to the ‘Elisabeth Legend’ and ‘Le Triomphe Funèbre du Tasse’ are particularly successful. Liszt’s work ‘Die Legende von der heiligen Elisabeth’ for four-piece solo ensemble, choir and orchestra, written between 1857 and 1862, is simply a magnificent work that is just as much in need of rediscovery in its original form as this piano arrangement recorded by Armstrong. It is clear that Armstrong conjures up the hauntingly beautiful melodic lines as well as the distinctive retractions on the keys like few others. But the two Bach transcriptions by Liszt are particularly successful in this memorable concert, and they are very much in keeping with Armstrong’s conception of the interpretation of baroque and especially Bach works on the piano. He himself once said in an interview that even when interpreting original baroque works, he feels first and foremost like a pianist. Of course, he also relies on the large dynamic arches in Liszt, but he handles them very carefully in Bach.

In all the interpretations to be experienced on this DVD, one senses the influence of the composer, arranger, analyst and thinker Kit Armstrong in every bar. These are interpretations that do not pull for effect, but follow a very clear sound philosophy of this pianist on the one hand and an exquisitely responsible sense of value on the other.”

Press photo for editorial use, only.